“If man realized that the universe like him can love and suffer, he would be reconciled. If thought discovered in the shimmering mirrors of phenomena eternal relations capable of summing them up and summing themselves up in a single principle, then would be seen an intellectual joy of which the myth of the blessed would be but a ridiculous imitation. That nostalgia for unity, that appetite for the absolute illustrates the essential impulse of the human drama. But the fact of that nostalgia’s existence does not imply that it is to be immediately satisfied. For if, bridging the gulf that separates desire from conquest, we assert with Parmenides the reality of the One (whatever it may be), we fall into the ridiculous contradiction of a mind that asserts total unity and proves by its very assertion its own difference and the diversity it claimed to resolve. This other vicious circle is enough to stifle our hopes.”

The Myth of Sisyphus is Camus’ attempt to answer the question whether life is worth living if it is absurd. Part of the answer is establishing indeed that life is absurd. For Camus absurdity arises from 2 facts: (1) The unreasonableness of the world and (2) The human desire for unity, and a reasonable world. I find that Camus does not really argue rigorously why life is unreasonable. I think he takes it for granted that much of the work showing that the world is unintelligible has been conclusive and he briefly yet with poetic and beautiful language restates those points.

His first major tenet is that there is no unity of knowledge that is attainable. How are we to interpret Camus?

What does he mean by unity? In what way specifically is the world unintelligible? There are a number of different ways in which to interpret Camus: I will look at how historically the failure of rational empiricism as the new modern philosophical paradigm led to nihilism.

Rational empiricism is a family of ideas that began modern philosophy. Descartes the father of modern philosophy set the stage for rational empiricism with his doubting method for obtaining knowledge. Descartes claimed that we must doubt everything that is not certain and begin only with what is certain and cannot be doubted. The implications of that idea was that we only have knowledge of our own mental states and ideas. When I see a table, I cannot be certain I am seeing an actual external table; I can only be certain that I have an idea of a table. With that the gulf between the subject and the object is irreparably severed. Certain knowledge of the world became impossible.

The second major tenet of the rational empiricist was that our knowledge of the world consisted of primary and secondary ideas. Primary ideas are quantitative features such as length, size, velocity. These are real features of the external world. The secondary ideas are qualitative features such the redness of the rose, smell, taste : these features the rational empiricists tell us originate in the mind and the actual external world is empty of such qualitative features. Thus empirical knowledge became the paradigm of true knowledge and this was bolstered by the success of physics and chemistry with its focus on the quantitative aspects of the world. Thus true and rational knowledge became empirical and everything else became suspect. Ethical knowledge became subjective and thus the fact/value split was born. Value judgements such as beauty, goodness, love, rightness and purpose became subjective. Which meant that the external world was actually empty of vale and that we as humans conjure up these values and project them onto the value less world.

The only rational and knowable thing about the world is the mechanical and empirical. Questions beyond that are unknowable. Questions such as why there is such a mechanical empirical world to begin with cannot be answered. There is no reason, no explanation and no cause for why there is anything. As soon as you offer an answer or explanation you have left the rational empirical realm and leaped into a realm which is intrinsically unknowable and therefore irrational.

This is the picture of the world that has been painted by modern philosophers. 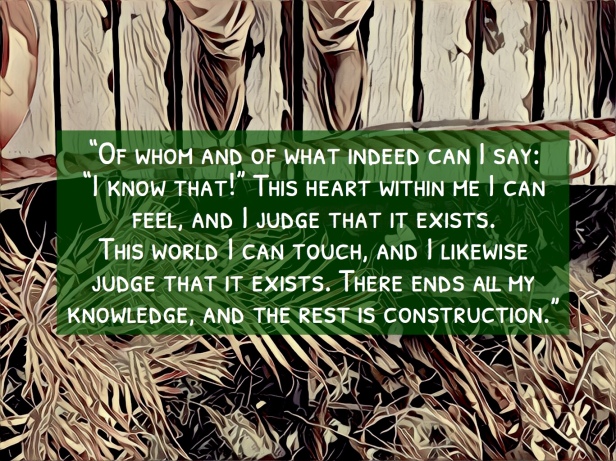 Now if we are to interpret Camus in this light then a number of issues with his argument emerges. I want to highlight 2 issues that come to mind.

There is no fact/value split. The Aristotelian-Thomistic worldview which was toppled by modern philosophy had no problem of values. Each particular being or object had an essence or nature which determined the kind of thing it is and what ends or purposes it was intrinsically directed towards; this is what Aristotle called final causes. Each kind of thing has particular potentialities, inclinations which it actualizes thereby fulfilling its nature. A tree absorbs water and light for its own purposes of growth and flourishing. Purpose is embedded within nature. Things are intrinsically orders towards certain ends and this however does not mean they are conscious of those ends. For Aristotelian- Thomistic thought the fulfillment of the ends that substances possess by virtue of their nature is intrinsically good. Goodness is simply the bringing to completion or fulfillment of some intrinsic disposition. The fact/value dichotomy is therefore nonexistent in such a world. It means then that the immanent frame of the world is interwoven with value, teleos, purpose and goodness.

Not only was purpose present in the immanent and natural world but there was a universal transcendent purpose that human beings as rational beings could discover and participate in. There was a cosmic transcendent narrative that explained and gave meaning to all the particular things. In such a world there was simply no loss of meaning or any feeling of absurdity.

Second problem. Camus himself sows the seeds that spring up to undermine his claim. Camus takes for granted and insists that the world is unintelligible and that it lacks unity. One can take this to mean there is no universal knowledge or universal principles to be understood. Another meaning could be that there is no unifying connection or principle between particular individual things.

Recall a major premise for Camus is the human condition, our nostalgia for unity, the absolute or universal. Within man lies an intrinsic desire and inclination for a transcendent myth that connects all the particulars together. This nostalgia is absolutely unique to humans. We are able to recognize this condition within us and communicate it through elaborate myths, stories, philosophies and art. We are self-conscious of our condition and realize we are alone amongst the other animals to experience this. The problem lies in the fact that Camus is making a general and universal claim about human beings. It is not just a claim about himself or a particular group of people at a particular time period – it is a universal claim valid for all human beings. It means he knows at the very least something universal and intelligible about the world and human beings. Unknowingly he undermines his own position by affirming that the human mind can grasp universal knowledge even if only concerning the human species.

Thus far Camus has not persuaded me that we live in an absurd world. His arguments seem to rely on the failure of rational empiricism and the skepticism that it leaves behind. A world that is unintelligible, unreasonable and unknowable. In such a world only what is empirical is rational and therefore value, goodness and beauty being non-quantitative and therefore non-empirical are deemed irrational and without an objective base. However if I adopt a different set of presuppositions such as those of Aristotle and Aquinas then the world is intrinsically intelligible and good; even if my knowledge will not exhaust all that can be known – there are things that can be known.