There is something transcendental, awe inspiring and calming about being in the middle of the sky flying over the most majestic clouds. The tranquility that overcame me as I gazed at what immediately seemed to be a glimpse of the purity and splendor of heaven.
My mind couldn’t help it but remind me of Blu and Exile’s song- Below the Heavens. He opens his song with a question.

As I stood in awe at the vastness of the sky my answer to that would undoubtedly be God. No doubt Blu was paying homage to Nas’ classic song The World is yours, however it also reminded me of a more ancient lyricist- King David the psalmist. In Psalm 24.1 he says “The earth is the Lord’s, and everything in it, the world, and all who live in it”. And again in Psalm 89.11 he says, “The heavens are yours, and yours also the earth; you founded the world and all that is in it.”
It has been a week where I found myself thinking quite a bit about heaven , hell, life and death. A friend of mine tragically passed away in car accident at the tender age of 24 and so she opened the door to questions we seldom do not like to think about. At my grandmother’s funeral the Pastor in his sermon said “We close the eyes of the dead, and they in turn open our eyes”. Death has a way of distilling the mundane from the essential, and I found myself asking what does it all mean? There’s a song by Jay-Z called “This can’t be life” the chorus just echoed the struggles of my heart:

As I attended her memorial services I found some themes were consistently present. The hope of “a better place”, the comfort of heaven and an after life. A sense that this life cannot just end the way it does, like an unfinished story that continues with another still to come sequel. TI and Jamie Foxx teamed up to pen a deeply moving song called Live in the Sky, where they lament the loss of loved ones.

If there is no eternity- life becomes absurd. The tragic death of my friend becomes meaningless and renders our pain and sorrow quite absurd. However I found no one who held the view that she is dead and that’s it- there’s no life, there’s no heaven or better place- just nothingness. As I thought about his view, that of fading into nothingness:I found it depressing and giving no solace. A world view without eternity becomes incapable of making sense of the tragedy, pain and loss of a loved one. Why cry over what is simply a natural and physical process with no more meaning than that? It makes sense to cry over death if it was never supposed to be part of our human experience, it makes sense if death is like that unwanted intruder who has broken into our homes to disrupt it.
Only the Christian story makes sense of this; it alone gave me tremendous hope and comfort knowing she had chosen to be a follower of Christ and therefore would be in heaven. The day will come when we will see each other again. Jesus during his final days before his crucifixion said to his disciples “Although you may die, because of me you will live”. There is no other worldview that gives such an assurance and a sense of hope in the face of the death. Contrary to providing escapism and isolation from the present reality, it gives a very real existential incentive and hope to combat the struggles of life. Jay-Z features Scarface on the same song, This Can’t be Life and in his verse he finds hope in this narrative:

Now as I walk into the studio, to do this with Jig’
I got a phone call from one of my nigs
Said my homeboy Reek, he just lost one of his kids
And when I heard that I just broke into tears
And see in the second hand; you don’t really know how this is
But when it hits that close to home you feel the pain at the crib
So I called mine, and saddened my wife with the bad news
Now we both depressed, countin our blessings cause Brad’s two
Prayin for young souls to laugh at life through the stars
Lovin your kids just like you was ours
And I’m hurtin for you dog; but ain’t nobody pain is like yours
I just know that heaven’ll open these doors
And ain’t no bright side to losin life; but you can view it like this
God’s got open hands homey, he in the midst.. of good company
Who loves all and hates not one
And one day you gon’ be wit your son

As the plane began to decline and go below the clouds, or rather below the heavens – the sky turned grey. It was dark, there was no light and the mood was somber. Yet I had engraved the picture above the clouds and knew I would only be below the heavens temporarily. The vicissitudes of life became more bearable when viewed through the lens of eternity in heaven. The apostle Paul in his second epistle to the Corinthians said “Our momentary and light afflictions are creating for us an eternal glory that far outweighs the all”.
CS Lewis had that verse in mind when he said:

“That is what mortals misunderstand. They say of some temporal suffering “No future bliss can make up for it” not knowing that Heaven, once attained, will work backwards and turn even that agony into a glory.” 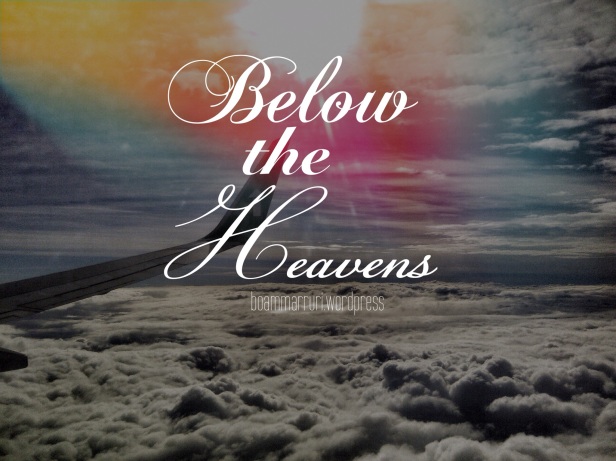